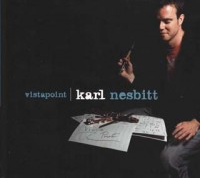 At the core of the album are Karl's new compositions and arrangements, as performed by a five-piece band blending rhythm section with Irish traditional instruments. Influenced by innovators of Irish music over the past twenty years especially, Karl's respect for Traditional Music shines through in his treatment of the various sets on the album, whilst achieving a tasteful, fresh and exciting debut.

Vistapoint features solo performances from Karl on flute and bouzouki, songs from John Spillane and Niall Connolly, and duet/solo tunes from Máiréad and Seán Nesbitt, reflecting the more authentic background Karl's family have in the music. It features new tunes from Edel McLaughlin, Marien Collins, Seamus Gibson and Sean Nesbitt, as well as traditional classics from Josie McDermott and William Marshall(Scotland).