In an insription in the Book of Armagh Brian is titled “Brian Imperatous Scotorum - Emperor of the Irish”. Brian was a brave warrior and a courageous military leader. The Leabhar Oiris states that Brian engaged the Vikings in 25 pitched battles and was victorious in each.

On the 23rd April 1014 he defeated the Danes at Clontarf. Unfortunately he was killed by Brodar, a fleeing Dane who came upon Brian in his tent praying. 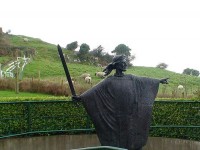 Brian as King exercised his power in a just and patriotic manner looking after the welfare of all his people and protecting them from their enemies.

He was also a man of learning and Ireland had relative peace and prosperity under his leadership. He rebuilt and restored the monasteries and places of learning that had been plundered by the Danes. He encouraged students to study abroad and invited students from abroad to study in Ireland. Brian also ordered the copying of manuscripts and fostered the arts of music, poetry, genealogy etc.

A representation by Colm O Meachair of the Brian Ború Harp can be seen in Brú Ború.

Come and visit the Palace of Ború, located beside the seat of his kingship. 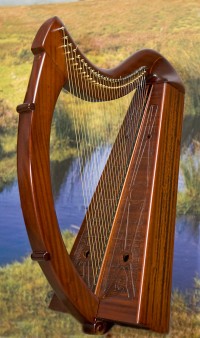 Above is a replica of the Brian Ború harp which can be viewed in the ‘Sounds of History’ exhibition.