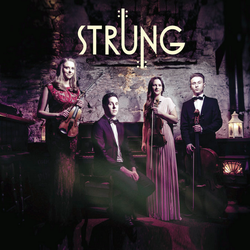 Strung are a contemporary Irish music ensemble comprising Maria Ryan (violin/vocals), Lucia Mac Partlin, who is part of the Brú Ború performance group (violin), Séan Warren (cello) and Aonghus McCarthy (piano). Originally forming in Cork, they have toured extensively in Ireland, Europe and the US. Their dynamic ensemble and unique backgrounds allow them to subtly integrate complex harmonies and innovative motifs, while staying true to the deep-rooted authenticity of traditional Irish melodies. Strung’s sound radiates with originality, yet has an understated energy that instantly captivates.

This album was recorded in Spring 2016 at Cork School of Music. Thier approach to this album is one which holds true to their classical training. It steers away from the conventional treatment of traditional tunes, but is anchored by their genuine passion for traditional Irish music.