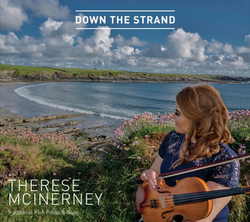 Therese McInerney - Down The Strand (CD)

Therese McInerney hails from a little coastal townland just outside Miltown Malbay, Co. Clare. She grew up surrounded by Irish Culture and developed a love for Irish Traditional music, song, dance, history and the language from an early age.

An avid Traditional musician, set dancer and gaeilgeoir all through her primary school days, Therese developed her love of singing and drama during her time in Scoil Mhuire Ennistymon secondary school, where she participated in musicals and choirs.

Therese went on to study a BCL International Law Degree in University College Cork, where she volunteered in the UCC Radio Station. Therese had her own radio show on UCC98.3FM for two years for which she received a "Smedia" or National Student Media Award for Irish Radio.

In September 2016, she completed a master's in Traditional Irish Music Performance at the Irish World Academy of Music achieving first class honours where she received Tuition from some of the finest Traditional Musicians in the world.

Therese has just released her debut album "Down The Strand" which incorporates her fiddle playing and singing. This was a lifelong dream of Therese's and she is currently busy launching and promoting the album as well as teaching the next generation of musicians and singers in Co.Clare.

As well as performing regularly at several festivals and events in Ireland and abroad, entertaining at Irish Music sessions and performing at wedding ceremonies and receptions, Therese also works freelance in Irish Television. In 2017 she completed a TV Production course in The Park Studios, Dublin and since then she has worked on the production team for RTE's Fleadh Cheoil Programme, TG4's Gradam Cheoil and in Clare FM Radio. In February 2018, Therese got her own weekly slot on Tipp FM. She presents the Galtee Sessions every Saturday night from 8-10pm. To contact Therese in relation to Tipp FM please email Galteesessions@tippfm.com. In May 2019 she also joined the infamous West Wind team as a regular host and presents the traditional music programme every Tuesday night on Clare FM from 7-9pm.

This album includes 12 tracks of traditional fiddle and singing with some new compositions, and wonderful accompaniment by Brian Donnellan (piano/bouzouki) and Sharon Howley (cello). It also includes an 8 page booklet with information on each track and photography by Niall Cosgrove.